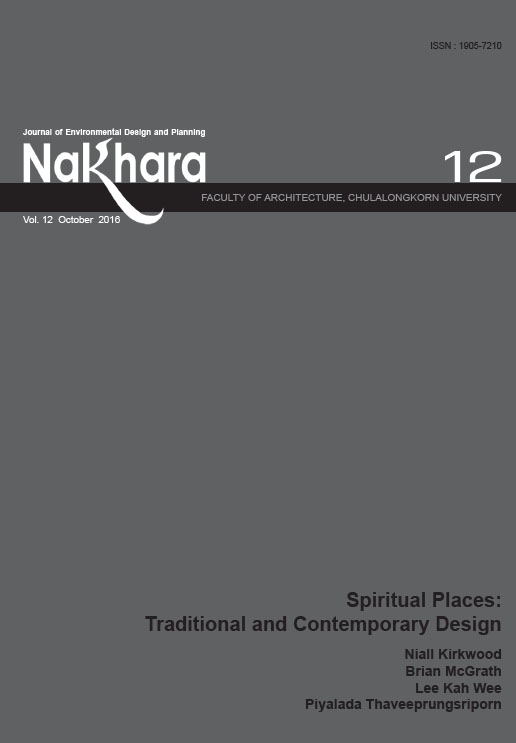 Homo sapiens are concerned with the environmental crisis. There are many attempts to solve the
ecological problems through various disciplines; scientific, political, historical, sociological, religious
and architectural. But the situation is getting worse. There seems to be no special subject of study which
can solve the problem except landscape architecture.
The main roles of landscape architects are to preserve the natural environment, such as national parks or
sea coasts, and to improve the built environment, such as cities and consumed natural resources. But only
visible landscapes have been the focus. The environments consist of not only the visible, but also invisible
ones. Owing to Western scientific approaches, since the Industrial Revolution, the invisible environment
has been forgotten.
One hundred years ago, Keller (1915) argued that the physical environment is not all. There is the societal
environment of fellow-animals, and there is yet another environment which does not appear in nature at all:
the imaginary environment of ghosts and spirits. He argued that this significant universal belief is a case of
parallelism, one of the greatest concerns in primitive life was adapting to that spiritual environment.
A Korean scholar, Son Jin-tae (2002), who was kidnapped during Korean War, cited Keller’s assertion. Son
Jin-tae emphasized that the disappearance of the third imaginary environment should be restored in Korean
culture. But no one pays attention to this third environment. Environments are classified as physical-spatial,
economic-social, aesthetic-visual, ecological-natural, historic-cultural and spiritual-inner environments in
six fields (Kwaak, 2014). Moreover, the environments might be sub-classified in detail as natural, socioeconomic,
cultural-traditional, ecological, symbolic, aesthetic, astrological, acoustic and spiritual in nine
fields. Most of them are important for humans and should be considered in global planning and design. But
the spiritual environment can be acknowledged as a core environment for the quality of life. In this article,
values of spiritual environment for landscape architecture will be discussed.

Gutkind, E.U. (1952). Our world from the air. London: doubleday. Retrieved from http://www.arcworld.org

Keller, Albert Galloway. (1915). SOCIETAL EVOLUTION, A case study of the evolutionary basis of the science of the study. New York: The MacMillan Company.

Pennick, Nigel. (1979). The ancient science of geomancy, man in harmony with the earth. London: Thames and Hudson.